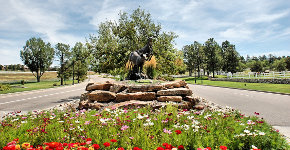 When the District was formed the roads, curb & gutter, sidewalks and medians were constructed. The roads and medians were turned over to Douglas County for maintenance approximately two years after the original construction. The Board became aware of damage to median curbing and, because Douglas County did not have the funds to maintain the median curbing to the level commensurate with the area, the District entered into a joint venture with Douglas County to make improvements to the medians. The District contracted with a landscaping company to design and construct an attractive landscaped area between the paved roadways. The medians were decorated with low-maintenance/ low water plants and hardscape features to provide an aesthetic, attractive improvement while also accommodating roadway drainage.